Songs of the Working Poor 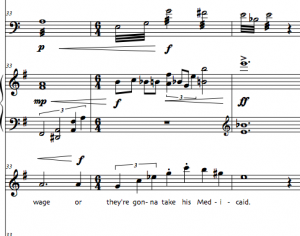 “My Biggest Mistake,” for soprano

This song cycle is part of a larger set of songs that address issues of working poor. Although the US remains the richest country in the world, over 43 million Americans live in poverty, and over 100 million live in “near poverty.”  While unemployment is low, most jobs for the working poor do not provide the proper health insurance, and Americans often have to take up more than one job to make ends meet. Both cities and rural areas have been ravaged by the departure of industry, and 2017 saw a peak in opioid overdose deaths.  The United States also has the largest prison population in the world, more than Russia or China.

I wrote the lyrics, many of which were inspired by personal life experiences from my career as a math teacher.   I’ve taught in a male prison, as well as K-12 schools in Baltimore City, New York City, and Virginia.  For a decade I learned stories of children from underprivileged families.  My own childhood experiences of being poor also influences my lyrics.

Songs of the Working Poor borrows ideas from a number of musical genres to give these sinister texts an ironic flavor.  Although many of the songs sound North American, I’ve also incorporated sounds of Caribbean music, European music, and classical music.  Given the rise of political and economic instability across the world, I wanted to make the music eclectic.  I have completed six songs so far, three for soprano, and three for tenor.

The songs for female voice are orchestrated for large ensemble: piano, flute, trombone, drum set, violin, double bass, and in one of the songs, steel pan.  The songs are influenced by cabaret, swing jazz, folk music, and Caribbean music. The first song, “My Biggest Mistake,” is based on a conversation with a Baltimore mother had to work so hard to provide her son with the basic necessities that she regretted even having a him. The second song, “Seasonal Affective Disorder,” hits straight at America’s present opioid epidemic. It notes some of the causes: doctors overprescribing medicine, depression, alcoholism, isolation, bleak winters, and the decay of cities and towns. A third song, “Wabash,” mourns the death of a loved one while portraying American landscapes. Themes in Wabash are reminiscent of both “Oh Shenandoah.” 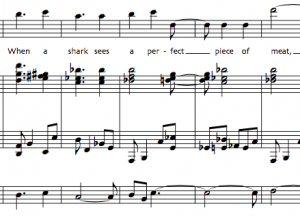 “The Food Chain,” for tenor

The second set, for tenor, piano, and double bass, addresses mass incarceration.  “Anger” explores the toxicity of rage, and how it inhibits judgement.  “The Food Chain” compares animal behavior to human behavior: in prison, you learn lessons such as playing dead, going for the low hanging fruit, and relying on group loyalty.  The final song, “Three Cents an Hour,” is sung by a prison inmate whose relationship with his daughter has deteriorated.  It alludes to an ever growing practice of slave labor in the US: the only way the inmate is allowed to talk to his daughter is by working for an entire month at three cents an hour.  “Three Cents an Hour” and “Anger” are both completely tonal, but “The Food Chain” is written in a twelve-tone style.

I hope to write up to twenty Songs of the Working Poor, including some for alto, mezzo soprano, and bass.  I’m happy to transpose or make small revisions to the songs (both the vocal parts and the instrumental forces) to accommodate a more successful performance.  These songs can be performed individually, or as a set.  If you’d like to view the score, or listen to a MIDI realization, please feel free to reach out to me at thetruebadour@gmail.com.

Written on the Train