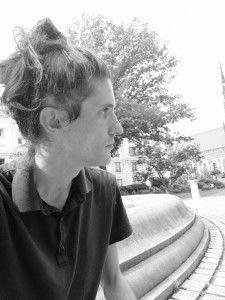 In an world where authenticity increasingly matters, Elliott Grabill brings an unique perspective.  Though he majored in music, he put off further musical training for ten years, believing his style would be more unique if he followed a path in life that included serving the community.  He balances his career as a composer with also teaching mathematics in New York City, Baltimore City, Virginia, and the Jessup Correctional Institution.  In 2009 he suffered a near death experience and continues to have seizures to this day.  All of these experiences have nurtured a musical voice that is both deeply personal and extremely relevant to our times.

He’s currently composing a song cycle that addresses social inequality, based on his experiences in public education.  The songs, with self-authored lyrics, were hailed by Ron Beckett as doing “what great art has been able to do – raising awareness on issues society blindly accepts.”  His songs received an honorable mention in the Arcady 2019 Emerging Artist Competition .

His electronic work has been described by the InTowner as “hauntingly beautiful,” filling concert halls with looping, virtuosic passages, and hypnotic etherial textures.  He won 3rd place in the Peabody Prix d’Eté for his meditative electronic work Gravity for solo clarinet, and received the Dark in the Song Prize for his bassoon quartet Escape.  He’s also written solo electronic music for flute, bassoon, alto saxophone, baritone saxophone, synthesizer, and fixed media.

For over a decade he has written music for ensembles such as Pique Collective, Dark in the Song, the Washington Men’s Camerata, the Meridian Arts Ensemble,  and Quartetto Apeiron, as well as collaborating with artists of other media like Danielle Madrid, Vin Grabill, and the Black Cherry Puppet Theatre.  Soloists such as Lynn Hileman, Peter Sheppard-Skaerved, Hila Zamir, Melissa Lander, Shawn Earle, Andrew Im, Tae Ho Hwang, Michele Jacot, and Andrea Cheeseman have also taken on his work.  In the mid-Atlantic region his work has been performed or screened at the Rosebud Film Festival, the Kennedy Center for the Performing Arts, the Windup Space, Reverb, the Black Cherry Puppet Theatre, the Peabody Thursday Noon Concert Series, the UVA Technosonics Festival, the Temple University Conwell Dance Theatre, and American University.  His work has also been featured at Electroacoustic Barndance, the Athens International Film and Video Festival, inner sOUndscapes, the International Computer Music Conference, the SEAMUS Conference, the New York City Electronic Music Festival, June in Buffalo, highSCORE, the National Student Electronic Music Event, and the Toronto International Electroacoustic Symposium.